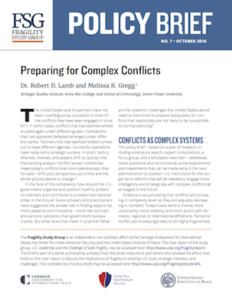 ■ The United States and its partners have not been unambiguously successful in most of the conflicts they have been engaged in since 9/11. In some cases, conflicts that had seemed settled erupted again under different guises. Combatants that had appeared defeated emerged under different names. Partners that had seemed reliable turned out to have different agendas. Successful operations have rarely led to strategic success. In short, tactics, alliances, motives, and players shift so quickly now that existing analytic “conflict lenses” sometimes make today’s conflicts look more kaleidoscopic than focused – shift your perspective just a little and the whole picture seems to change.

In the face of this complexity, how should the U.S. government organize and position itself to protect its interests and contribute to a stable international order in the future? Some scholars and practitioners have suggested the answer lies in finding ways to be more adaptive and innovative – more like startups and venture capitalists than government bureaucracies. But what does that mean in practice? What are the systemic challenges the United States would need to overcome to prepare adequately for conflicts that realistically are not likely to be susceptible to normal planning?

This policy brief – based on a year of research, including a literature search, expert consultations, a focus group, and a simulation exercise – addresses these questions and recommends some experiments and investments the administration can make to position U.S. institutions for the longer-term reforms that will be needed to engage more intelligently and strategically with complex conflicts (at all stages) in the future.