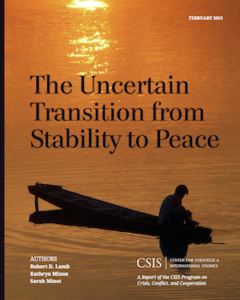 ■ Most violent conflicts since the turn of this century were in countries that had experienced an earlier violent conflict. How can we tell when a country is likely to remain stuck in a cycle of violence? What factors suggest it might be “ripe” for stabilizing and peace building? The authors studied four cases in this report. Chad is stuck in a cycle of violence, while El Salvador, Laos, and Mozambique have had different results in their transitions from violence to stability to peace. Conflicts without internal cohesion of combatants or pressure from foreign patrons to stop fighting are probably not ripe for stabilizing. Where there are subnational or regional actors committed to violence, post-conflict peace building is not likely to succeed without enforcement capacity to contain violence or demonstrated commitments to increasing political inclusion and making material improvements in the lives of residents.