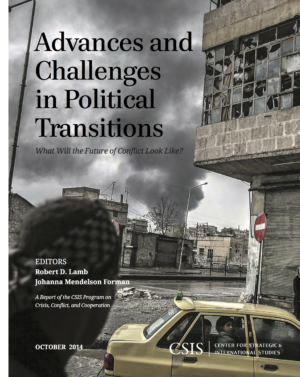 ■ The United States has provided support to political transitions worldwide for many years. But it was just 20 years ago that the U.S. government established an office specifically to respond when regimes or conflicts ended and to maintain momentum toward positive change. Today’s conflicts, however, are more complex, usually involving half a dozen or scores of armed groups, and their alliances and motivations are not always clear. Seldom are peace agreements in place to act as a roadmap to the transition. And transition work now more commonly begins before violence even ends. This report, published on the 20th anniversary of the founding of the Office of Transition Initiatives at the U.S. Agency for International Development, consider what today’s complexities imply for how conflicts and transition work might evolve in the future, with chapters on each major region of the world and on topics such as extremism, urbanization, gender, and humanitarian response.